State visit to the Republic of Lithuania - Military cooperation, solidarity, and a visit to Kaunas

The third and final day of the State Visit to the Republic of Lithuania starts under the theme of military cooperation and solidarity. After that, the King and Queen will travel to Kaunas for a programme with mainly cultural activities.

The King will start the day with a visit to the NATO enhanced Forward Presence Battle Group at the Pabradė military base. He will be welcomed on site by President Gitanas Nausėda, Minister of National Defence, Mr Arvydas Anušauskas and Mr Valdemaras Rupšys, Head of Defence and Commander of the enhanced Forward Presence Battle Group. The Belgian Minister of Defence, Ms Ludivine Dedonder and the Belgian Head of Defence, Admiral Michel Hofman, will also attend. The visit will highlight the importance of military cooperation between Belgium and Lithuania. Since 2004, Belgium has participated in NATO missions in Lithuania, contributing to the security of the Baltic states and, by extension, the whole of Europe. After the official viewing of the troops, the King will meet the Belgian military in Pabradė for an informal discussion.

At the same time, the Queen, accompanied by First Lady Diana Nausėdienė, will visit the Centre for Ukraine in Vilnius. This centre offers Ukrainian refugees cultural and sports activities, language lessons, as well as advice and assistance. The initiative is a cooperation between the government and civil society and a clear example of Lithuania's deep-rooted solidarity with the Ukrainian people.

In the afternoon, the King and Queen will travel to Kaunas, European capital of culture in 2022 and briefly Lithuania's capital during the interwar period. They will be solemnly received by mayor Visvaldas Matijošatis at the historic presidential palace, home to the original declaration of independence from 1918. The delegation will also visit the National Čiurlionis Museum dedicated to painter, composer and writer Mikolajus Konstantinas Čiurlionis and take a guided tour in the city of Kaunas towards Unity Square. A visit to Vytautas Magnus University and a cultural cooperation project between Kaunas and Designregio Kortrijk will conclude the State Visit to Lithuania. 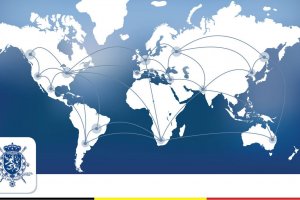 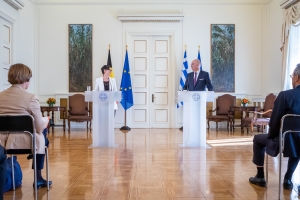